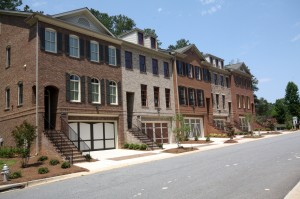 Peachtree Residential just released it’s final new townhome building at Victoria Square!  We are breaking ground on the final building! Six units of three level luxury townhouse living in the heart of Alpharetta.  The downtown Alpharetta location is only 1.6 miles off GA 400 and within walking distance to shopping, dining, park and nightlife.  Brick townhomes include 4 bedrooms, 3.5 baths and are approximately 2950 square feet. Not only is Victoria Square located in the highly sought after downtown Alpharetta area, but children will attend top rated schools!

St James floor plan is open with a finished basement for a fourth bedroom or media/office. The first floor kitchen is open to the  family room and a separate dining room. The oversized owner’s suite has a luxurious double vanity bath. There is spacious secondary bedrooms with a large hall bath and separate laundry room. Also included is a patio, fence, a $15,000 design center allowance. Incentives for the first two buyers! Anticipating year end closing.

Also if all that was not enough to make you want to live in Alpharetta then check this out….Forbes.com named Alpharetta the 7th Friendliest City in the U.S.!

They said the city’s love for special events such as Taste of Alpharetta helped it earn the seventh spot on the list.  Alpharetta is the seventh friendliest city in the United States, according to Forbes.com and Nextdoor.com, and the only Georgia city on the list. The city’s love for special events – such as the Arts Streetfest, Taste of Alpharetta and the Scarecrow Harvest – helped the city earn the honor. To find out more about what the rankings were based on and what makes Alpharetta so friendly, visit the website.